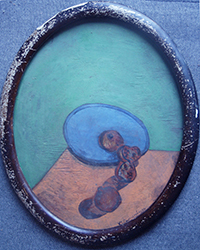 Russian, some Lithuanian and French artists had many contacts during the first decades of XX century. Exchanges of exhibitions were frequent. Artists travelled and studied together. The art of Michail Larionov and Natalia Gontcharova was based on Primitivism. Their pictures reflected a world built by the new generation on the foundation of old tradition. It was thought to be important for the artist to have a personal vision, which was not limited by any fashionable trends. On the other hand, artists were expected to keep an open mind as far as new thoughts were concerned and to have a positive attitude toward experiments. The artist was free to choose his own means to realize his objectives. These artists were strongly decorative and they used rich, mellow colors. Their works show a close relation to the tradition of French painting.

Acquaintance with Vladimir Kasatkin gave me every benefit. An artist born in Lobcovo village, Russia, Ivanovo district. However, his fate determined his life to live in Kaunas. As a painter, he grew up or realized his childhood dream and talent for art here in Kaunas. In fact, I was not interested in the artist’s work. I bought some paintings during the first meeting. I soon sold them in Lithuania. The theme was repeated in the paintings. The artist repeated his own works that had been painted before. I was interested in his relations with Russia, the artist’s childhood, kinship relations with Nikolaj Kasatkin who was famous enough in Russia. I also wanted to see what paintings he has at home because there was nothing in the artist’s workshop that would catch my eye. After several meetings, he invited me to visit his home. It was much more interesting here, the artist had a small collection of art that adorned the walls of his house. The artist liked to talk. Once he said that his daughter Natalia has a collection of Russian art. The collection was based on portraits, it was painted by different artists, from different periods. So I had work here.

I became a regular visitor. We had two types of Russian artists here in Lithuania. The first was a Russian personality who escaped from a Soviet Russia and lived here until the Soviets came in 1945, and other group Russian people who came here with Soviet army and stayed here. Also here was a third group. Worst group. These are Russian agents and complainants. Which were housed in the homes of every more educated Lithuanian. This contributed a lot to the exile of Lithuanians to Siberia.

V. Kasatkin told a lot of stories about collectors and collections he knew. Mentioned such names like the Tsudovski professor in Leningrad (St. Petersburg), Drevina Jekaterina from Moscow. But I didn’t find any information about it. Not enough, remember artist Nikolay Kasatkin, because Nikolay died when Vladimir was age 8. He never talked about his relationship with this family.

Now I want to go back to more recent times. My collection included about 10,000 arts and cultural objects in 2008. I always wanted to organize an exhibition in Kaunas. This idea was realized in 2008. I named the exhibition “Art Deco in Lithuania”. The name was chosen as the city is still famous for its unique art Deco architecture. I did a big job: framing, descriptions, and finding the right place for exhibition. But the exhibition did not receive much interest. There were several articles in the local press. At the end of the exhibition I wanted to hold an auction. But nobody wanted to buy either. According to experts, there were no very high values ​​of the work in the exhibition, but it is worth attention to it. As a result of this opinion they add restrictions for my collection in the exhibition: not allowed export from Lithuania. I never will understand why. Museum Director O. Daugelis (1955-2020) said: to buy with overpayment without careful research we cannot. All the more so as the museum’s funds have not yet been exhibited. However, we can’t be allowed to export everything from Lithuania either.

When I started with my collection, I took a few more important steps. I got several books about theater, catalogs, theater programs printed during the pre-war period in Kaunas. Mostly I was interested in periodicals 1920 – 1939. Here I found the names of theatre directors, actors and others who worked in Kaunas theatre. I still have all the books about it. I also bought everything that was printed about Kaunas Theater in Soviet times. Although the information was distorted, it was possible to find the names of people who worked in the theater after the war.