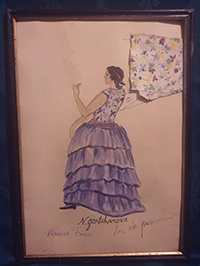 Why it’s Hard to have an Art collection and Administer it? Part 15.

This question arises when you start examining the work you have done. The first question I am looking at now is: is it worth starting? Maybe there were other ways and options to invest money. It is difficult now to assess what would have been if I had chosen another pose. But it is clear that the art world is run by an industry that has little or no interest in art. Works of art have turned into a tool that is used or not to create added value. The advantage of artists who created real art and basically dominate my collections is that they didn’t think about selling when creating, just did what they felt and what seemed necessary to do in the current period. Now, reading various literature, I understand, then there was also commerce, but this commerce was based on the talent of the artist, there was no creative deception here. There were many talented people in various fields of art and they joined together to create the final product that was bought by the public, in the sense that the artist dictated the fashion. Now money dictates and values art. That is my opinion. Going into this market, I was naive, if you have a work of art that speaks for itself, you don’t need any proof, but if the industry asks you for proof and you present them that are obvious, that proves not enough. Working so hard makes it easy to lose motivation.

As was noted before, all painting is stored in storage. Cold winter and big humidity damaged frames and some paintings.I need to do a hard job: here I added images, what I need to do step by step. I carefully remove the glass, clean up the dirty surface, if possible trying to save the frame, also I remove all metals for safe shipping. Paintings more or less get a new life. In the future I will plan to get this job to do to professionals.

What I found about this painting today: “La Vie Parisienne ” ( Parisian Life) operetta by Jacques Offenbach probably revised by Leonide Massine in 1933 for the ballet Russe de Monte Carlo for his earlier version. The list of composers and painters now included, besides Larionov, Gontcharova and Stravinsky, who were as international in taste as director himself, such names as Poulenc, Auric, Mildhaud, Satie, de Falla, Laurecin, Picasso, Derain, Pruna, Rouault. During the years between the war and Diaghileff’s death in 1929. Three choreographers shared the responsibility of creating repertory, namely Leonide Massine, Bronislava Nijinska and Georges Balachine. Ballerina Marina Franca, probably American.

Following history, the twentieth century. The art of scenography was already past three stages of its development: the first was the layout prevalent in realistic theater, the second was planar painting based on the dominance of style and color, and third According to A. Ekster (her students S. Usinskas and A. Gudaitis), she represented a new word for scenography abroad, the main element of the theater is action, not “place of action”, therefore the decorations must be architectural, effectively arranged in three spaces. “The actor must remain at the center of the atmosphere of this dynamic scene, and the purpose of the decorations must be to experiment with his actions.” N. Gontcharova used the intuitional ideas of dynamic constructivism in Kaunas State Theater in her own way, who found a peculiar expression of a musical performance based on the concept of musicality in plastic forms. In Lithuanian scenography, M. Dobuzhinsky, A. Galdikas, S. Usinskas and L. Truikys established those principles of opera and ballet performance decoration that solve the rhythmic, dynamic and colorful accents of the stage image with the dramaturgy of music. Now, with a clear understanding of the connection between artists of different generations, I have found a possible movement. The chain Exter, Gontcharova, Galdikas, Dobuzhinsky goes through to Valeska, Gudaitis, Varnauskas, Labuckas, Cepenas, Liberts and other people in later generations.

A. Exter letter: citate from 1929 : “.. I’d like to see Russians above everyone else, for I’m convinced that Russians are the strongest and most talented people. They’re strongest in the theatre, but in the other plastic arts we are pathetic and clumsy imitators…” Interesting sentence… you can find more about it in British library.