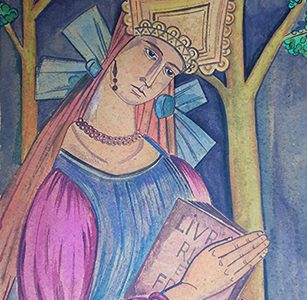 Why I Start to Read the Books Again… British Library. Part 12

The last book I was reading was probably 26 years ago. There are various excuses – maybe I didn’t need it, maybe I didn’t have time, maybe just routine, daily work stoped me and there was no time left for that. Now some of the things I discovered online made me read again. The first one was, article in one auction after sale: “They had the work previously appraised by a major auction house and knew the painting to be worth $ 40,000.00. I said, no, it was worth a fortune. We resolved the argument with a sale I arranged in London for millions of dollars. My next Goncharova, years later, pretended to be a Larionov still life with watermelons worth $ 50,000.00. upon the reverse by Larionov’s second wife. We sold that one in London, again, but for 2.25 million dollars “. I am happy that someone used my memories and bought a few paintings from my collection and did expertise, right description, provenance and sold for big money. But not really happy I am, because I sold these paintings only for a few hundreds of dollars. I found more facts about other sales in famous auction houses later. I found a British library in London. Now I spend alot time here. Because on the internet you can find subjective opinions or some facts that could be used differently. As someone did with my memories. My reminiscences are based on real facts from my life. And nobody can’t change it or use it. Now I want to find more information as possible in the library and want to use it together with my memories. Only then I will be happy with it. I want to describe every detail, every person I meet looking for paintings and sketches. It may sound boring to someone, but it’s important to me. Only by putting together all the little things will I be able to create a complete picture of my collection.

The next person I visited was Jadvyga Mozuraite – Klemkiene. He was a person who not only provided me with a lot of knowledge, but also indirectly directed my searches to Riga (Latvia) and even further to Belarus and Poland. Her memories of some people were like an arrow to me where I needed to go next. I became a regular customer here. I bought a lot of art she had.

Jadvyga Mozuraite-Klemkiene (1923 – 2009) Born in Kaunas.  In 1950 graduated from Lithuania State Institute  of Applied and Decorative Art. Acquired the qualification of Sculptor. For many years he worked as a teacher at Lithuanian State Institute of Arts. Received of honours as Distinguished Teacher of LSSR 91960). Member of Lithuanian Artists’ Association since 1954. Participant of exhibitions since 1950. Works in the sphere of plastics and print.

The following are three names I wanted to find: B. Sruoga, J. Gruodis, and M. Chekov. It was completely unclear how to start the search and whether there were any surviving relatives or descendants.

I took the simple way: we have B. Sruoga street in Kaunas and here is B. Sruoga memorial house – museum.

I followed the text from the book Kaunas State Theatre: 1918 The Lithuanian government established the “Theatre Commission”, “which was to take care of the establishment of a professional Lithuanian theatre and its school”. In this respect, Stasys Šilingas, Liudas Gira, Jonas Vileišis, Antanas Žmuidzinavičius, Adomas Varnas and Balys Sruoga are in the Commission. Theater commissions contributed to the establishment of the first theaters.

B. Sruoga was famous Lithuanian writer, but about his work in theatre was not enough information. I Looked around in the museum and asked museum staff maybe they know more about B. Sruoga family. The woman who had a job in this museum from the establishment recommended visiting a house opposite the museum. Here live Sruogaite, maybe she had relationships with this family, the woman said.

The door was opened by a woman of respectable age. I said I was interested in art and would like to talk. The interior of the house was typical in the 1920s, where you felt luxury, seeing that the landlords were once very rich. The woman was not inclined to talk about the past. But she was delighted to learn that I wanted to buy something. I only later understood why. I bought one painting, and again as in other places I visited, became a regular visitor here.

But finding the other names mentioned was not easy. J. Gruodis, M. Chekhov had a strong connection with the Russian theatre. I found books and catalogs about J. Gruodis. But about Mr. Tchekov almost nothing. So I decided to visit Mrs. Labuckiene again, who is really familiar with theatre. Also I needed again  an art expert Z. Varnauskas.

I. Labuckiene told me about M. Chekhov. M. Chekhov with M. Dobuzinsky had art school in Moscow 1909. One of the pupils here was M. Chagall. {With all due respect to the people I met, I want to say that not all memories could have been very accurate given the age of the people who told the stories and events that took place many years ago. I want to check every fact to make my story as accurate as possible. Checking the facts in the library, I will provide updated information alongside the memories I heard. This will allow us to get a more accurate picture of history. Fact clarification: Since 1906 the set designer M. Dobuzhinsky dedicated much of his time to pedagogical work. Together with L. Baxt, he set up a studio which they called Baxt and Dobuzhinsky School. One of the students was Marc Chagall.} Michail Chekhov  who headed the former First Moscow Theatre Studio which had separated from Moscow Academic Theatre in 1922 and became the Second Moscow Art Theatre. Mikhail Chekhov’s great acting talent was universally recognized. Chekhov did not possess great directorial talent, something even he himself acknowledged. While admiring Chekhov’s performance, the critic did not hide his disappointment in the “lack of directorial coordination”. In 1928 Mikhail Chekhov left the Soviet Union. Unsuccessfully attempted to organize a Russian theatre in Paris, he performed and directed in Lithuania Kaunas State Theatre, where also was M. Dobuzhinsky. Moved to America, when Soviets came to Lithuania 1941.  I. Labuckiene gave me the original photo of J. Gruodis with composer signature. And told me something very important about N. Gontcharova’s job in Kaunas State Theatre. This information now I can base with one article from a book in Lithuanian language printed 1983.