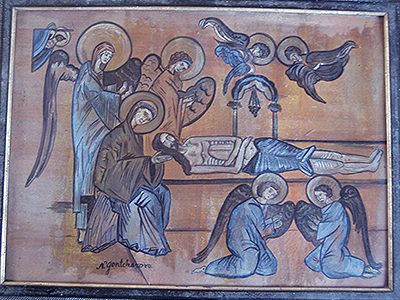 Every nation, every age, has a different style:

From N. Gontcharova Album (1911?) “When I follow the path of Cézanne, my works satisfy me less than those that derive from totally different artifacts such as icons, the Gothic style, and so on. Perhaps this is because of a lack of talent or of a kinship with other souls, and this terrifies me sometimes. But I am taking the path I want. Cézanne and icons are of equal value, but the works that I have made under the influence Cézanne and those that I’ve made under the influence of icons are not.  Corot is outstanding, but I just can’t work under his influence. I’m not not European at all. Eureka.A church mural motif.  An ocher background, light with chrome. In the background, pale green, yellowish branches weave together around the whole cupola.  Many of the branches hold tiny leaves, like those of a dahlia (in three shades of green). The branches have flowers, pink (scarlet and cinnabar) with white lead and a chrome, and tiny fruits, yellow and red. The branches are joined to blue trunks with little transverse strokes of a paler color. The trunks descend a little below the middle of the church windows. At the top of the trunks and on the branches sit peacocks and tiny, varicolored birds.The trees are being watered by holy figures and angels with dark faces and halos, in simple clothes with heavy folds.  A radiant Christ, a pole axe in his hand, descends from a mountain to his church and garden in order to find his withered tree. Will the Lord not let me paint this? Lord, forgive me….Jealousy is based on sensuality – that is, on sexual attraction- and that attraction, which, for no reason what –  soever, draws you to people who otherwise would hold no interest at all, is a tortuous feeling.  It would be interesting to see what would happen if the attraction were to be gratified every time. Perhaps it would then not be aroused so often and would not always be such an insoluble issue, would be something that can destroy the happiness of an entire life at any moment, destroy the love that we value, would not set all hell loose without giving anything in return. Even when not followed by agonizing consequences, jealousy still disturbs your life, disturbs your social interaction with others. It prevents you from becoming close to those of the opposite sex and often drives you away from your own friends. Perhaps I alone am such a corrupt monster….. Others argue – and argue with me – that I have no right to paint icons. I believe in the Lord firmly enough. Who knows who believes and how? I’m learning how to fast. I would not do so otherwise, for it feeds too many rumors that tarnish the best feelings and intentions. People say that the look of my icons is not that of the ancient icons. But which ancient icons? Russian, Byzantine, Ukrainian, Georgian? Icons of the first centuries, or of more recent times after Peter the Great? Every nation, every age, has a different style. You can understand the most abstract of things only in the forms that you see most often, and also through whatever works of art you’ve seen-that is consolidated within some kind of material, through an understanding or, rather, recapitulation by previous artists. Of course, within all that material you perceive only what resonates with you. In a certain sense, everyone is color – blindhence the differences we see in artists of the same period and even in the most realist of artworks by different peoples, whether Russian, Chinese, or Persian, etc.., made during the same period, [or) the differences between the ancient artworks of a people and later ones by the same people. That’s the point.
“It is not to an artist’s merit to find himself and then to keep on painting in the same old manner and with the same old colours. It is much better to keep creating new forms and colour combinations. You can combine and invent them forever.

My next task was to find R. Songailaitė. Finding was not easy. I reviewed all the books but did not find any information. I later found out that the last name had changed. According to tradition, a woman used to take a man’s surname after a wedding. in Lithuania It was normal. It is different now. Finally I found: Songailaitė-Balčikonienė Regina. Her biography is really impressive. But at the heart of my business was something not mentioned in her biography, but what she told me.After a phone conversation, R. Songailaite invited me to a guest. She lived in Vilnius, Antakalnis district. The home had an impressive collection of oriental art. We talked for a long time. I said that I was interested in the history of Kaunas theatre. I said that I knew Z. Varnauskas. She listened with a smile. Yes, I am well aware of Z. Varnauskas’ collection and history, she said.
Then she immersed herself in memories: When I was 12, my father always took me to the theatre. We were not jurors, I walked behind the scenes, I knew actors, artists and theatre directors. My father had a job there, and as a child, I spent time among theatre workers. I was very happy spending time in the theatre. I was known by M. Dobuzhinsky, A. Galdikas, N. Gontcharova and another artist. My best friends were the actors. Dobuzhinsky, like me then, seemed to be the main person behind the scene.  N. Gontcharova looked great, but to me she always seemed to be sad, her eyes were sad ….
Then R. Songailaite showed me his collections, among many personal works, There were also a lot of works by other authors. Most of which were created in the 1920s – 1940s. Unfortunately she refused to sell anything. But this meeting inspired me even more.

Songailaitė-Balčikonienė Regina: He was born on September 20, 1922 in Kretinga.He died on September 2, 2007 in Vilnius.Artist-scenographer, Honorary Citizen of Kretinga District.He lived in Kretinga until he was 8 years old. 1932–1941 – studied in Kaunas St. At the Congregation of the Congregation of the Sisters of Casimir (“Saulė”). 1941–1945 He studied graphics at Kaunas Art Institute, 1945–1948. – a degree in scenography, which he graduated with honors.Since 1948 worked as an artist at the Vilnius Opera and Ballet Theater, since 1958. – male artist. 1978 retired. 1980-1985 taught scenography at the Academy of Arts. Received an associate professor degree. For a long time he headed the scenography section of the Lithuanian Artists’ Union.The artist, scenographer R. Songailaitė-Balčikonienė has created over 60 productions at the Lithuanian Opera and Ballet Theater, and has been the chief artist of this theater for many years].”Traviata”, “Madam Baterflai”, “Toska”, “Lohengrin”, “Bohema”, “Aida”, V. Klova’s “Daughter”, awarded the Republic Prize, “Hoffman’s Tales”, directed by Juozas Grybauskas, “Faustas”, “Demon”, “Tanhoizer” – how many operas, how many ballet performances the audience saw with R. Songailaitė’s decorations, it would be difficult to count.Together with her husband Juozas Balčikonis, they have “dressed” many folk ensembles, including “Lithuania”, which has represented our country for many decades, and since 1950 have created clothing sketches for republican song festivals. Ornaments and color combinations typical of the Lithuanian nation were revived in the costumes of Telšiai “Masčio”, Alytus “Dainava”, Panevėžys “Ekranas”. Not only sketches were created for national clothes, but also fabric projects for each individual part of the garment. All the museums were visited and all the collected ethnographic material related to national clothing was examined – many copies of the drawings were made.1970, 1974 and 1976. had to work in Mongolia, helping prepare for a demonstration concert in Moscow.He received a silver medal from the Moscow Academy of Arts for his work on scenography.Since 1951 Member of the Lithuanian Artists’ Union. Participated in art exhibitions since 1950. Honored Artist of the LSSR (1959), Laureate of the LSSR State Prize (1960). He has participated in many joint exhibitions of the Artists’ Union. Some of them were in Moscow and St. Petersburg, as well as in Kaunas, Alytus, Panevėžys, Kretinga – in the palace of Counts Tiškevičius, USA. Organized 5 author’s exhibitions. There are many works in Lithuanian art and theater museums. He was awarded medals and diplomas and a Republican Prize for his creative work.In 1970, the book “National Clothing: for Elderly Dance Ensembles” was published.Collaborated with the Kartena community. The first gift to her is the coat of arms and flag of Kartena created and approved by the Presidency. 7 religious paintings were donated to the Kartena Nursing Home, a panel with stylized Kartena surroundings and a coat of arms was painted in the school lobby, and six compositions depicting 10 angels were painted in the Chancellery of Lourdes. 2002 On May 30, the title of Honorary Citizen of Kretinga District was awarded for merits to the country’s culture.

Mykolas Songaila (September 5, 1874 in Kuzmine, Pskov region, Russia – September 12, 1941 in Kaunas) – architect. After graduating from primary school and receiving secondary education, in 1894–1903. studied at the St. Petersburg Academy of Arts. He later improved in Italy. 1906–1919 taught at the St. Petersburg Polytechnic Institute, 1908–1921. – Institute of Agriculture, 1919-1921. – this rector of the institute. 1922 settled in Kaunas, Linksmadvaris. 1922–1941 taught at Vytautas Magnus University, was the head of the Department of Architecture. Buried in Petrašiūnai cemetery. “Designed structures”: Biržų bankas, Bank of Lithuania building in Kaunas. While still living in Russia, he designed many administrative, public, cult buildings and residential houses. According to V. Dubeneckis’ projects “Kaunas Reconstructed State Theater” (1923–1925), Ragutis residential house was built (1922–1923, Both with Vladimiras Dubeneckis), the Bank of Lithuania Palace (1928, with Arn Funk), Feliksu Vizbaru). ), VMU “Physics” – Faculty of Chemistry (1931).Led by Panevėžys (1930), Biržai (1935), Mažeikiai (1937), Kretinga (1938); with A. Funk – for the design and construction of Raseiniai (1933), Tauragė (1935) banks. He designed the Vytautas Magnus University town in Aleksotas (1925) and designed the architectural part of V. Dubeneckis’ tombstone (sculptor Juozas Zikaras) (1933). He wrote the book “Types and Norms of Sanitary Technical Equipment” (1916, in Russian).