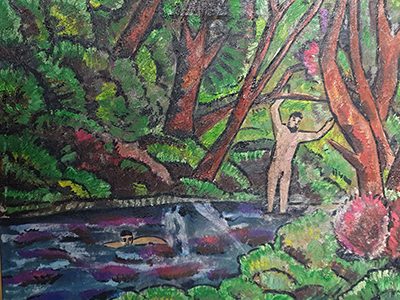 “Do drawings of the sky and the clouds in pencil and watercolor. Make them both literally and also as they might appear, in all cases observing their characteristics. Do this simply so as to seize the most outstanding characteristic at a given moment. In this way, no one drawing will resemble the next, just as it happens in nature that no one motif resembles another. Do drawings of things, the landscape, people just as they appear at a given moment in your imagination; fear absolutely nothing, no deformity of any kind, no fabrication, no fantasy. Try out various styles and methods, emphasizing first one part, then another, now movement, now the very  position of the object itself in space and its relationship to others. Change them according to your imagination and instinct, urge yourself to do it precisely that way or in accordance with the idea that you have worked out consciously in your own mind. Study the sky in engravings or other kinds of pictures. Study the expression of faces, too, in engravings, paintings, and in life” – citate from M. Larionov the letter to N. Gontcharova.

The next day, after Z. Varnauskas lectured on the value of art, I called J. Cepenas and agreed on a meeting. I was greeted by a polite elderly man. While we were talking, I looked around. Several interesting paintings hung on the walls. Among them were two paintings by A. Galdikas. That was good news, so the man knew A. Galdikas. We talked about theatre, Mr. Cepen really knew many theatre artists. He showed me his collection of rare antique books, which he was very proud of. He also showed sets of rare coins and very valuable orders. Those sets were interesting, but I was interested in the art of theatre. When I asked, maybe something you have about the theater: drawings or sketches, he replied that there are a lot of everything in his workshop. I offered to drive there and he agreed. The workshop was maybe a couple of minutes away from J. Capenas house. It turned out that J. Cepenas worked as an artist in Kaunas State Theatre. It is impossible to say what I saw when I went to the workshop. Huge piles, real mountains of drawings. J. Cepenas explained that he was too old to walk into the workshop. And that he is no longer engaged in creation. He’s going to sell his workshop, and he’d be happy if someone bought everything. I did so. My shed was once again filled with a huge pile of sketches. When I started exploring what I bought I discovered an incredible number of drawings that interested me.

Among them were M. Dobužinskis, N. Gončarova, K. Korovinas and other artists of theatrical costume sketches. Several of them had the seals of Kaunas Theatre Museum. Later I learned that after the war, when the Kaunas Theatre Museum was abolished, in 1953. Everything was moved to Vilnius. A new museum was established in Vilnius, which after the war (before the war, after Poland invasion) became the capital of Lithuania again. took over Vilnius, Kaunas became the temporary capital of Lithuania). Thus, when moving the sketches from Kaunas to Vilnius, some of the sketches disappeared somewhere. I found them in almost every collector. No one said how they got it and gladly sold.
Later I often visited J. Cepenas. He started to get sick, couldn’t walk anymore, he was cared for by his wife. I bought one painting by A. Galdikas in memory after the death of J. Cepenas.

Born in Kaunas. Graduated from Kaunas State Institute of Applied and Decorative Arts 1948. Acquired the qualifications of Theatre Artist. Member of Lithuanian Artists’ Association since 1964. A Participant of Revolt of June 22-28, 1941, received the Medal of Lithuanian Army Creators-Volunteers (1999). Participant of exhibitions since 1949. Worked in the sphere of paintings and book illustrations.

Another important contact I found using my books was M. Baltuskiene. Representative of the old generation. She no longer worked in the creative field. Everything that had been accumulated during life was in storage. Only a few pictures on the walls of the house. It was a simple, intelligent and educated woman. She showed me what’s in the warehouse and said she wanted to sell, it’s better than throwing. When we talked about theatre, about Z. Varnauskas (she considered Z. Varnauskas has a great personality), she recommended me to find two people: F. Navickas in Kaunas and R. Songailaitie in Vilnius. This was very important information as it became clear later. I bought everything from M. Baltuskiene’s warehouse several times. It was always a pleasure to visit her, to talk.

It was easy to find F. Navickas. He spoke on the phone quite cautiously. But meeting him was not easy. Only after a few phone conversations did we agree to meet in the city, in a neutral place, as he said. His behavior was unusual. He always looks around. He didn’t really want to talk about theatre. He told me an unusual story. The Nazis began persecuting F. Navickas when German troops marched into Lithuania. F. Navickas was constantly arrested, interrogated, and then again released. According to him, he was persecuted because in the public he had said something about  events that took place in Lithuania. According to F. Navickas, when the Soviet army entered Lithuanian territory, most of the Nazis were employed by the Soviet police. And again the same people started chasing him. After one excursion in France, he was barred from leaving the Soviet Union. F. Navickas was considered a foreign spy. Funny, he said, the Nazis thought of me as Russian spy, and when they switched to working for the Soviets, the same people, but now in red, said – I am foreign spy. Later we talked briefly about theatre. He said he doesn’t sell anything, but will give me one set as a gift. He sent it to me by mail. I didn’t see  F. Navickas any more. Now, searching the internet, I found a strange message. F. Navickas recently died at the honourable age of  in Klein Koris, Brandenburg, Germany. It caused me a smile, of course sad, but he lived for a respectable 96 years. But why  in Germany? That’s why I smiled.

Feliksas Navickas born in Lithuania. 1953 graduated from Lithuanian State Institute of Arts in Vilnius. Acquired the qualifications of Stage Decorator. Member of Theatre Artists’ Association since 1955. Member of Lithuanian Artists’ Association since 1961. Received an award as Distinguished Artists’ of LSSR in 1965. Participant of exhibitions since 1955. Creates stage decorations and costumes of theatre plays.